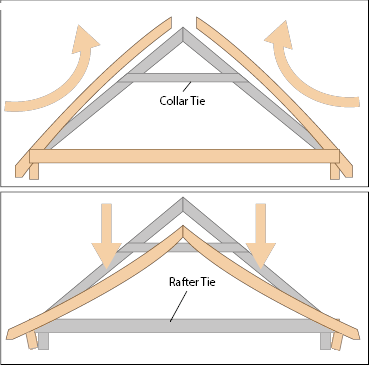 The wood roof ties calculator is capable of designing the ties and rafter for a gable roof having any combination of collar ties, rafter ties, or ridge straps. All load combinations are checked, and both uplift and downward forces are considered. Using the calculator involves three essential steps, and one optional step in which the design can be fine-tuned.

In the design of a gable roof, ties serve two purposes, as illustrated in the graphic on the right:

A tie located in the top third of the roof, usually called a "collar tie" or "collar beam", is most efficient for preventing the rafters from separating at the ridge in uplift loading. A tie located in the bottom third of the roof, usually called a "rafter tie" (and which may also serve a dual purpose as a ceiling joist), is most efficient in preventing the walls from splaying outwards under downward loading. However, a tie in any position will help in both scenarios.

Alternatively instead of a collar tie, a ridge strap can also be used to keep the rafters from separating at the ridge. However, a ridge strap has no effect upon gravity load scenario of the walls being pushed outward. Ridge straps are not designed in this module, but may be added to control the uplift separation.

The first step in using the calculator is to input the overall geometry. The diagram, an example of which is shown to the right, will update dynamically as each of the inputs are set. These inputs include: 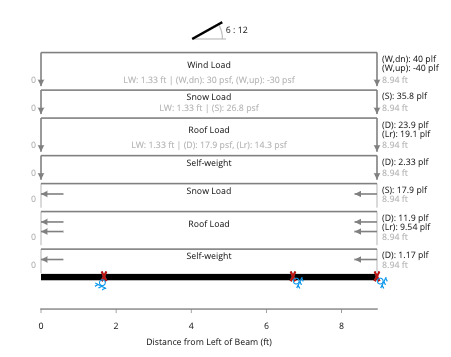 The calculation is pre-filled with the roof loads, snow loads, and wind loads, an example of which is shown on the right. It is likely that none of this will need to be updated, as the default load magnitudes and rafter spacing are all pulled directly from the Project Defaults.

The rafter member and each of the ties are set in the next sections. Members may be selected from our database of standard sections, or a custom rectangular section may be defined with any species, grade, and dimensions.

Design can be a breeze by using our member selector or autosize features.

Two worked examples are provided here: one of gravity forces only, and one of a wind uplift scenario. Both are simplified examples, but should be illustrative of the usage of this module.

A roof is to be designed having the following geometry and loads:

The first step is to convert the geometry into inputs compatible with the module. Rather than total roof width, the module asks for rafter plan length - or exactly half of the total roof width - which is 8.5 ft. Similarly, rather than total roof height, the module asks for the roof pitch, which works out to "8.5 : 12". Note that in the ClearCalcs platform, you can also enter formulas, so the following can also be entered in the Roof Pitch field (rise divided by run times 12):

The tie depth can be entered as it's given, simply as "3 ft". Finally, the module defaulted to an eave length of 1.5 ft, as would be typical for many houses, but in this problem, there are no eaves - so the eave length should be changed to "0 ft".

For loads, the ClearCalcs platform applies the magnitudes over a sloped area, not over a horizontal plan area. While entering "20 psf" and "35 psf" would be conservative, it would be overly conservative for this design. To convert a horizontal plan area load to a sloped area load, the magnitude needs to be multiplied by the cosine of the slope. This math can be done outside of the platform, but ClearCalcs also allows the user to enter formulas, so this can be entered as the following, for example:

Note that the problem says that self-weight is already included in the given dead load magnitude, so change "Include Self-Weight" to "No", and then the calculation is done! The optimal members can then be selected. Our member selector or autosize features can be used to quickly select the optimal rafter and tie sizes, or they can be manually selected in the relevant fields. A 2x10 Hem-Fir No. 1 works for the rafter, and a 2x4 Hem-Fir No. 1 easily works for the tie.

A full printout of this example using the ASD module can be downloaded here: Downward Roof Tie Example (note that this is the "Standard" print mode; one-page or full detailed print modes are also available) 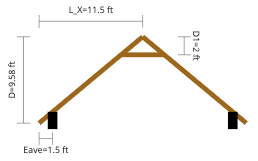 A roof is to be designed having the following geometry and loads:

For loads, the dead load is in the direction of gravity, but the wind is always perpendicular to the roof. Therefore, the "Orientation" column is important to set, and the dead load and wind uplift load must be added in separate rows in the table, as shown on the right. Also, the wind uplift is in an upwards direction, and therefore must be entered as a negative number.

A full printout of this example using the ASD module can be downloaded here: Uplift Roof Tie Example  (note that this is the "Standard" print mode; one-page or full detailed print modes are also available)

The module consists of two major portions: analysis and design.

The design of the rafter is exactly the same as that used in our regular Wood Beam calculators; details on this methodology are described in detail in the Wood Beam article, and will not be repeated here. For ties, because the module does not allow load to be applied directly to the ties, the ties are definitionally in pure tension (ignoring self-weight, which is negligible for the purpose of design). Tie design therefore adjusts the base tension strength with the following adjustment factors:

The adjusted tension strength is compared with the demand as calculated in the analysis.

There are two methods that could be used for analyzing a tied roof: either a full truss analysis, or an advanced beam analysis with oriented roller supports. While a full truss analysis would be able to handle more loading scenarios, it also introduces an unnecessary level of complexity, and this module therefore uses the latter method of an advanced beam analysis. That beam analysis looks at a single rafter in isolation (assuming that the left and right rafters are identical), with two possible support conditions depending upon whether the total loads result in a net uplift or net downward force: 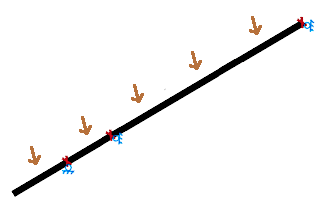 In a net downward force, the gable roof will tend to try and push the walls apart, and a tie serves the purpose of preventing this and holding the rafters at their original roof pitch. Usually, a tie used for this purpose is usually called a "rafter tie", and it is most efficient to place such a rafter tie in the lower third of the roof (at a relatively large depth below the ridge).

In this configuration, shown on the right, the beam model is supported by three roller supports. The bottom most support is oriented such that it can roll horizontally but not vertically, and represents the wall. The top-most support is the ridge, with a vertically-oriented roller support, representing the fact that the opposite rafter will prevent this one from moving to side-to-side, but nothing prevents the ridge from moving up and down. Finally, the middle support is a tie, which is also a vertically-oriented roller because it has no ability to prevent movement up and down, but does restrain the roof from splaying apart. 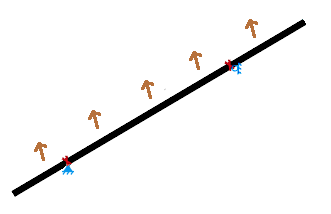 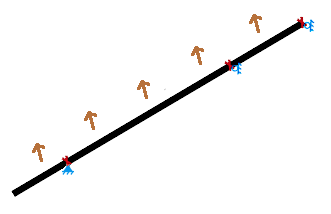 In a net uplift force, a gable roof will tend to stay in place at its bottom, but will try to split apart at the ridge. Either a tie or a ridge strap may be used to prevent the rafters from separating at the ridge. A tie used for this purpose is usually called a "collar tie", and it is most efficient to place it in the top third of the roof (at a relatively small depth below the ridge).

There are two possible support configurations for the net uplift condition, depending upon whether or not a ridge strap is present. Both configurations, shown on the left, have a pinned support at the bottom, representing a wall which does not move in any direction.

If a ridge strap is NOT present, as in the far left configuration, then there is only one other support, which represents the collar tie. That collar tie does nothing to restrict the up and down movement of the roof, but does hold the rafters together, and is therefore a vertically-oriented roller support.

If a ridge strap IS present, as in the second configuration, then an additional support is added at the ridge. This support is also a vertically-oriented roller, because the ridge strap does not prevent up and down movement, but does prevent the rafters from separating.

The reaction at the tie support is equal to the tension in the tie.